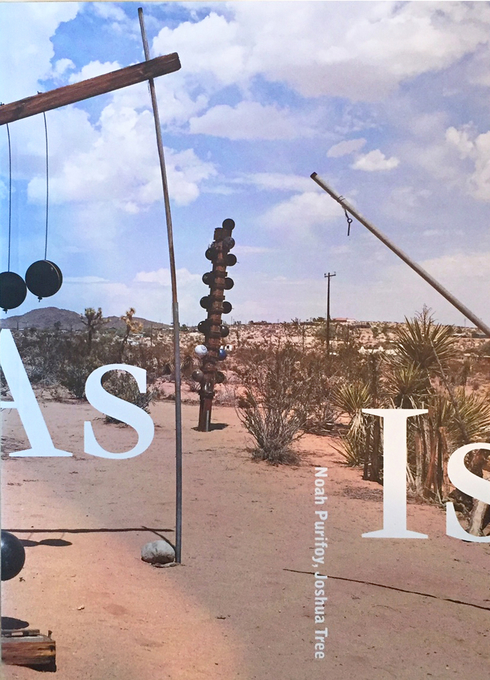 $25.00
“Setting foot on Noah Purifoy’s sculpture site, I felt I was invited to walk into somebody’s kingdom.” —Ed Ruscha

As Is: Noah Purifoy, Joshua Tree is a photographic essay by Dominique Vorillon that considers the desert museum project created by Noah Purifoy at Joshua Tree, between 1989 and his death in 2004. The images are accompanied by a short introductory text by Susan Morgan. Vorillon is a photographer who lives in Los Angeles and Santa Fe and works throughout the world. He has been driving across the American Southwest for more than twenty years seeking to understand a geography far different from that of his native France. His attentive images of the region’s vernacular landscapes nimbly capture roadside distractions, distant horizons, and the mutable desert light.

Purifoy enjoyed a long and multipart career as an artist and arts administrator, creating the non-profit art space Watts Towers Art Center, before he abandoned life in Los Angeles and resettled on a two-and-a-half-acre parcel of high desert land. He was 72, retired and living on a fixed income, when he relocated his studio and started building his astonishing outdoor museum. A lifelong poet of found materials and improvisational construction, Purifoy was a peerless virtuoso at riffing on culture, philosophy, and what he called his “self-imposed poverty.” In the desert, where he embraced a barebones economy and the opportunity to create outsized assemblages, his art flourished. During the summer of 2013, Vorillon first visited Noah Purifoy’s property near Joshua Tree, California, and was instantly taken by the singularity of the artist’s vision. He began to look closely at the particularities of the site, its compelling vision and off-kilter details, over several visits producing the series of compelling images collected here.